As always I seem to get an idea as a whole…..I can see what I’d like the finished build to look like.  Obviously, things get added and subtracted, especially as I learn what I can and can’t achieve!  But generally I have an overall look in my head and I print out pictures that somewhat match that look to have as inspiration.

For my Magic Library I knew I wanted the look of a centuries-old, paneled, beautiful, classic library look.  I tossed up whether to do a false wall to give the impression that it goes on and on, but decided against it as it was going to be hard to fit everything I wanted in as it was without wasting space.

One item that was high on my priories list was the ceiling.  When oogling over Pinterest I realised that most centuries-old, fabulous spaces had painted or carved ceilings.  My trip to the UK in 2017 saw me craning my neck every time we entered an old building as the ceilings were always astounding – even in the crudest of structures.  And so I had essentially 2 ceilings to consider and play with.  Right from the beginning I wanted to do lights facing toward the ceiling in order to highlight the richness of it.  I played with various ways of adding gold – different pens, paint, leaf.  I then realised I had embossing powders from my scrapbooking days.  I had to purchase a new embossing pen but the powders were still fantastic.  I printed out stencils on my Cricut and set about creating the ceiling.  The embossing added not only a fab colour but a really rich texture to the ceiling.  However, I did muck up.  The first time I didn’t center the details as I had centered the flooring.  It bugged me so much I’d wake in the middle of the night thinking about it.  So I completely re-did the whole ceiling and was much, much happier with it the second time around. 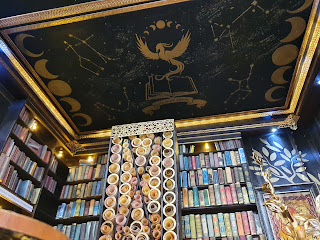 For the ceiling underneath the mezzanine level I used plain wooden flooring stained darker and then printed cardstock patterns using my Cricut.  I created just one that has a fancy MM (for Melody of Miniatures) and used that for the middle, spreading the rest out from there.  Although it’s barely seen this is one of my favourite parts of the inside.  It looks like carved wood. 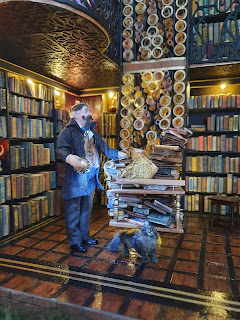 I knew I didn’t want windows to the outside world but wanted to incorporate a long stained glass window in the corner that is a feature for those climbing the circular staircase.  I created a few different windows using various different patterns until I was happy with it.  The Phoenix really became a focal point of the library and this was more through luck than judgment.  My Phoenix sitting on his perch was from Natalya of the Etsy shop Volnamini, actually bought way before I knew I was going to do a magical library!  When working on the stained glass window I wanted to use symbols to sum up the idea of a magic library.  So books and the tree of knowledge were a given – but then adding in the Phoenix who, of course is a magical being, added the colour and it went from there. 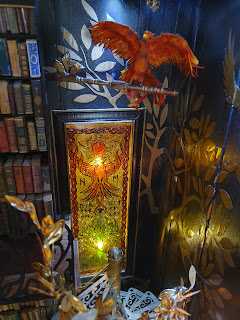 Likewise the spiral staircase.  Originally I was going to have a dragon head or similar as the railing coming down.  However it somehow morphed into the tree of knowledge which of course also blended with the window behind and the detail on the walls.

There are a few little things that aren’t necessarily noticed at first glance.  For example there are ‘no wands’ signs around the library.  My librarian, Hugh de Gardien du Savior, the latest in a long line of librarians, became annoyed with having to continuously clean up after magic gone wrong!  So wands need to be stored at the wand holder near the front door, or just not bought to the library at all.

The other thing I’d like to point out are the little broomsticks by the front door.  These are by a friend and amazing miniature maker – Meghan of Dollhouse Smithery.  I love the quirkiness of them! 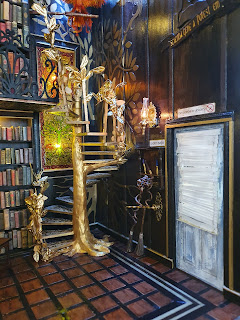 Hugh’s cat who is head butting the floating book cart is made by the fabulous Yuliya of the Etsy shop Masters Family Shop.  The cat is a Maine Coon based on our gorgeous furbaby who passed at age 13 a few years ago. The ‘floating cart’ was one of my first creations for the library.  I had been imagining it and loved creating it. 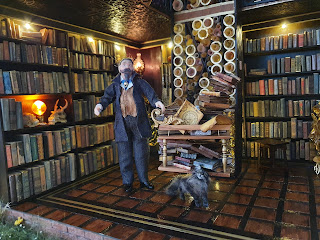 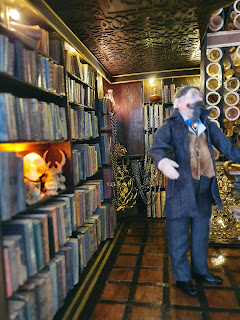 There is a chained library in the bottom corner of the library – these are all the very old and very special books made mostly from printables supplied by Lady Miniac (www.ladyminiac.com) and following her amazing tutorials on Youtube.

One of the more important aspects of the inside of the library is the magical portal which is an entry for any magical being world-wide.  It is run by magic and a steampunk-type contraption situated beside the portal.  Originally this was going to be a holographic portrait or a 3D portrait when my hologram didn’t work.  I had been considering a portal in my original idea and after deciding that it didn’t look like a portrait, I added more resin to make it larger and it became the portal.  I 3D printed the man – downloading the files from Esther Marker of the Etsy shop Esthers Miniatures. 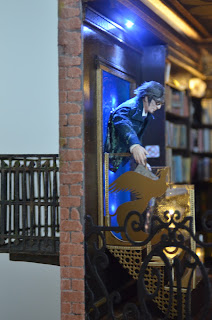 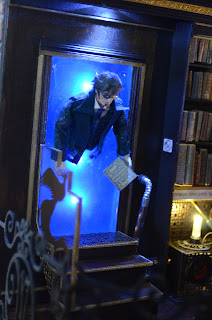 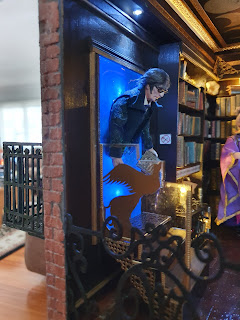 Hugh and the lady (who still hasn’t told me her name) were from kits by created by Sherri Colvin of www.minidollkit.com  I have made quite a few of these dolls now and really love them.  I painted, wigged and dressed all of the dolls.  Originally the lady was going to be dressed fairly plainly, mostly in black.  However, she preferred the colours and I used one of Sherri's patterns to create her outfit. 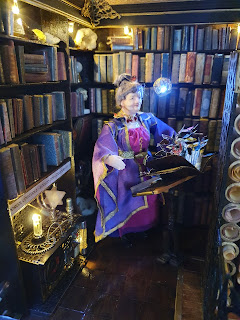 There are a few things made that I didn’t end up including – for example two library ladders.  I’ll set them aside and use them for something different.

I had intended to make a floated chandelier but after creating the ceiling I didn’t want anything to detract from that so I just used lighting on the walls etc.

While it doesn’t quite grab me quite like my dragon cottage – Hic Sunt Dracones, I’m happy with the overall look.  I’m wondering if I need to do more outdoor scenes because the most fun I had creating this was the outside.  Maybe I should look at doing dioramas…..I love 1:12 scale though!

And so, I give you my Alchemy Athenaeum, built from the Mini town studio kit bought from Miniatures.com for the 28th Annual HBS Creatin’ Contest.

Please remember to leave me any questions or comments and I’ll be happy to answer when I can.

Stay creative and enjoy your quirks, 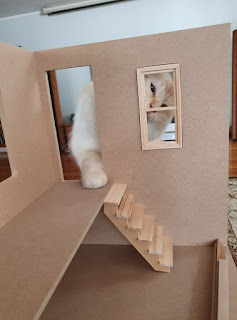 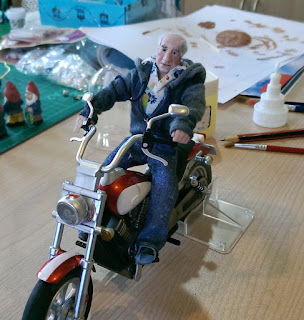 Melody of Miniatures - Living a Creative Life
I'm a New Zealand mum of 2 amazing young adults. In 2014 my daughter and I found some 1:24 room-box kits online which we bought and had fun putting together. From then on I was well and truly hooked! From the Outlander Apothecary, a Lantern home to a derelict cottage - each project provides me with new challenges, often with steep learning curves. I have finally found my competitive spirit - my Dad would have been so happy! Here I share my ups, downs, and the general kerfuffle my life usually is. Completed by 3 gorgeous Birman cats and a car-mad husband.